In Georgia, fencing art has been known since ancient times and used in military affairs. Hevsureti still has an original fencing style, which stands out for its direct combat stand, variety of attack and defense techniques, shield and synchrony of swords. The so-called classical fencing differs significantly from Hevsurian. 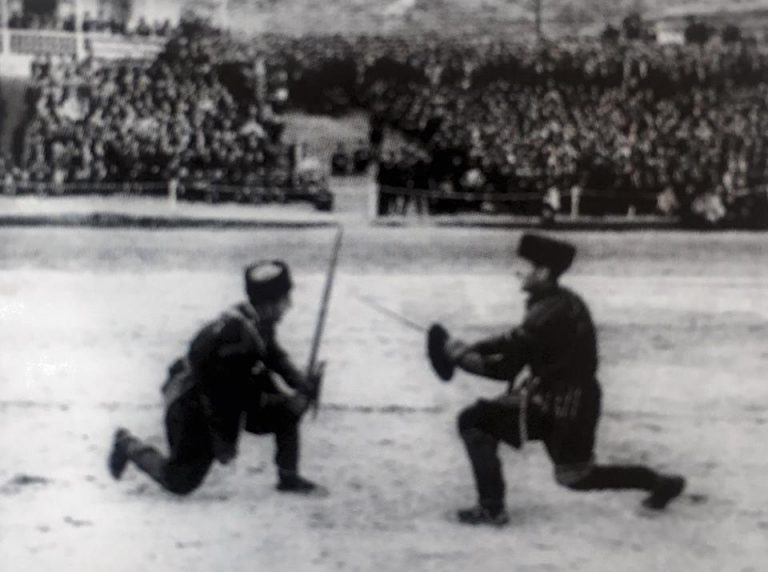 In Georgia, Rudolf Weiss, an Australian teacher at the Kutaisi classical gymnasium, founded a fencing group in the 1970s. In 1887, students of the Tbilisi men's first gymnasium got acquainted with fencing, and in 1894, retired officer Pyotr Saltykov founded the first fencing club in Tbilisi. He also opened a fencing hall for commercial purposes in 1900. Later, another hall was added to Tbilisi. Officership and a rich stratum of society were mostly trained here, the purpose of which was only entertainment, not participation in competitions. 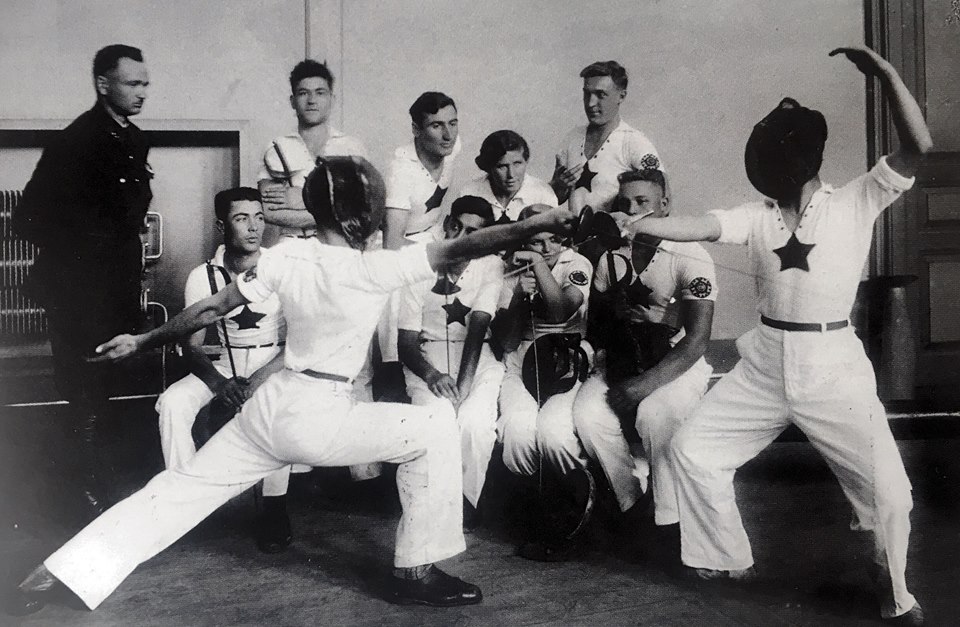 Georgian fencers joined the USSR championship in 1944, and received the first gold medals in 1948 (epee, team-Giga Eristavi; sabre, team-Alexander Batmanov). In 1949, the Allied championship was held in Tbilisi. Tbilisi's Alexander Adarov won the individual sabre tournament. The norm of the master of sports was the first to be fulfilled: among men - Otar Didebulidze and Boris Bondaryov (1941) among women - Isolde Esiashvili (1958). 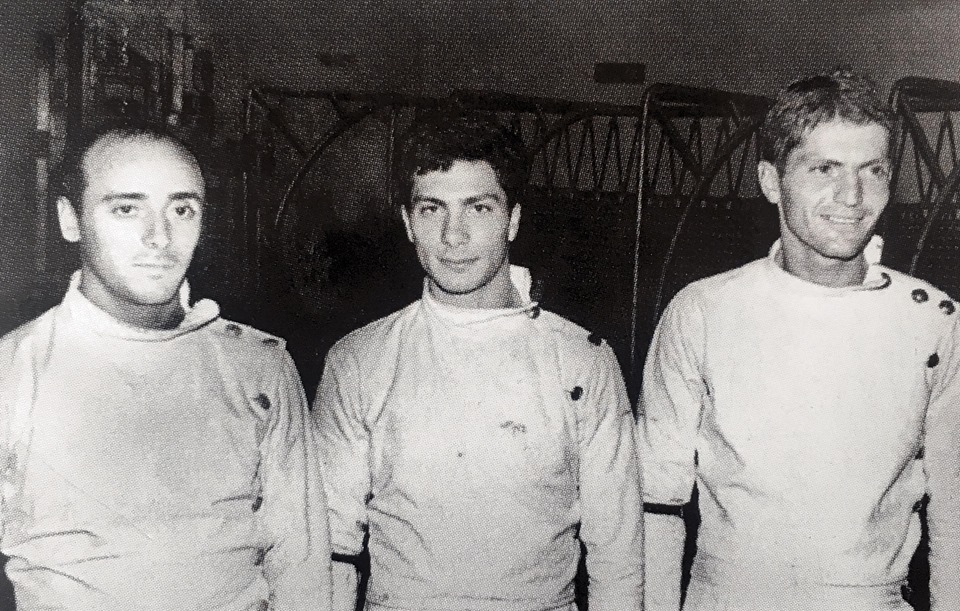 In the 1950s, several fencing centers were established in Tbilisi, including the Army Sports Club, the Dynamo Sports Society and the Institute of Physical Education. Other well-known coaches worked here: Lev Golovnya, Akaki Meiparyan, Anatoly Fedorov. Fencing took hold in Kutaisi, Batumi, Sukhumi, Gagra, Zestafoni and Rustavi, and specialized sports schools and fencing groups were opened at complex sports schools. The circle of fencing enthusiasts expanded, so the master's standard was performed annually by 10-15 athletes. The best of them were invited to the USSR national team, which at that time was a great success. Guram Kostava, a fencer who won a silver medal at the 1959 World Championships, achieved the first major success of this team. 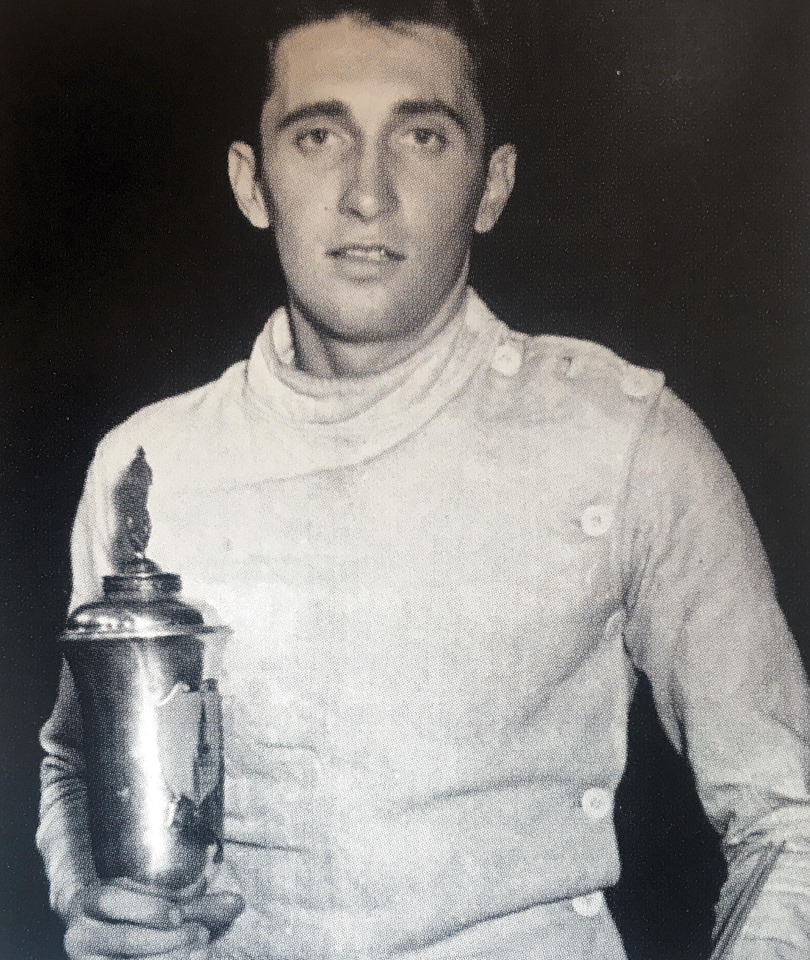 The 1960s turned out to be the most successful for Georgian fencing. Guram Kostava also became the first Georgian fencer to win a medal at the Olympic Games (bronze, Rome, 1960), and four years later (Tokyo, 1964) fencer Nugzar Asatiani won Georgia's first Olympic fencing gold. During this period, Kostava Asatiani, as well as Yuri Osipov, achieved great success at the World Championships as part of the Soviet team, both in team and individual championships. In addition to them, in the 60's, Revaz Tsirekidze, Maurice Sakhvadze, Guram Lortkipanidze, brothers George, Kote and Archil Gogelia, Nikoloz Andriadze won significant victories. Famous fencers of this generation were coached by well-known coaches all over the country: Trifon Meskhi, Simon Sakvarelidze, Shota Daraselia.

Vladimir Apсiauri (coaches - Malkhaz Gabuniya, Simon Ajimamudov). In 1982-88, Vladimir Apciauri became the Olympic champion (Seoul 1988), the world champion (1982), the second (1988) and three-time third prize-winner of the World Cup (1982, 86, 90), the winner of the European Cup in team competitions (1985), international friendly matches. Champion of sports games in the individual and team championship (1984), winner of the II Universiade Prize (1986). Since then, Georgia has had a representative among elite referees, veteran fencer Maurice Sakhvadze, who tried at two Olympic Games (Moscow 1980, Barcelona 1992), and in 2004 (Athens) became a delegate to the referee. 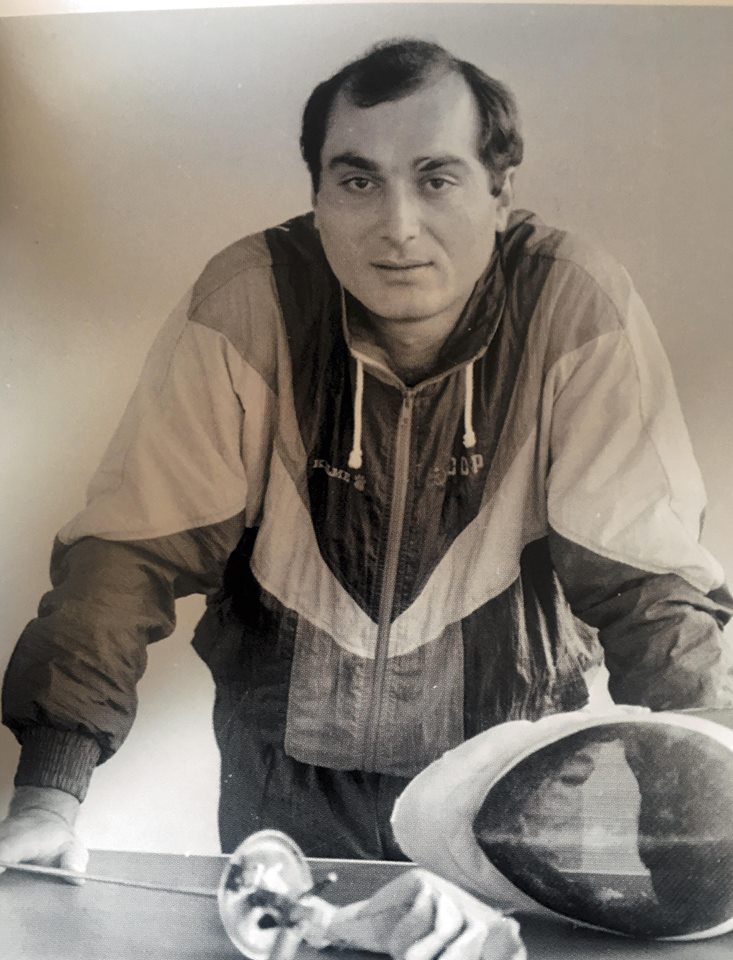 In the early years of independence, the development of fencing in Georgia dragged on, and successes decreased. Georgian swordsmen have been performing on the international stage without much success since the 1990s. However, internal competitions of different ages were held regularly. Archil Lortkipanidze was the first fencer to speak on behalf of independent Georgia at the Olympics (Atlanta, 1996). A new wave of success came in the second decade of the 21st century. Ferry veteran Merab Bazadze headed the Georgian sabre fencing team. The merits of Mirian Kikalishvili, Ludwig Gaganidze, Nodar Didia and other coaches are also noteworthy.

The first medal in the history of independent Georgia (at official international tournaments) was won in 2011. Fencer Mikhail Mardaleishvili took third place at the World Cadet Championships. In 2012, Beqa Bazadze won a bronze medal among European fencers under 23 years of age. 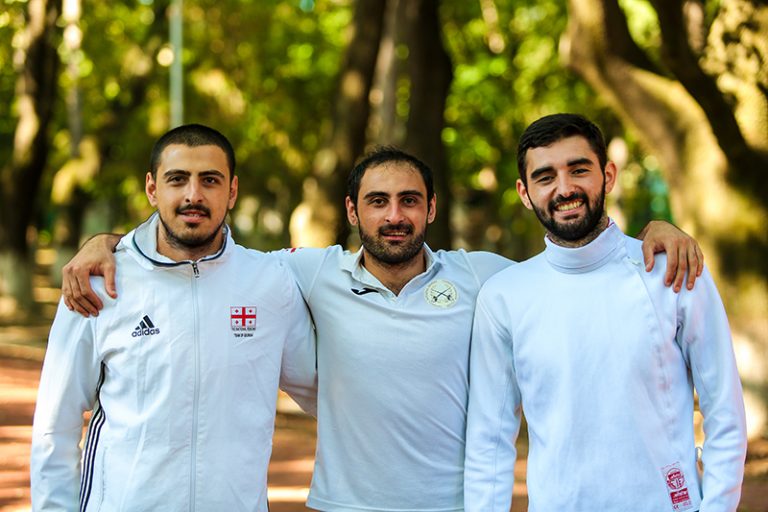 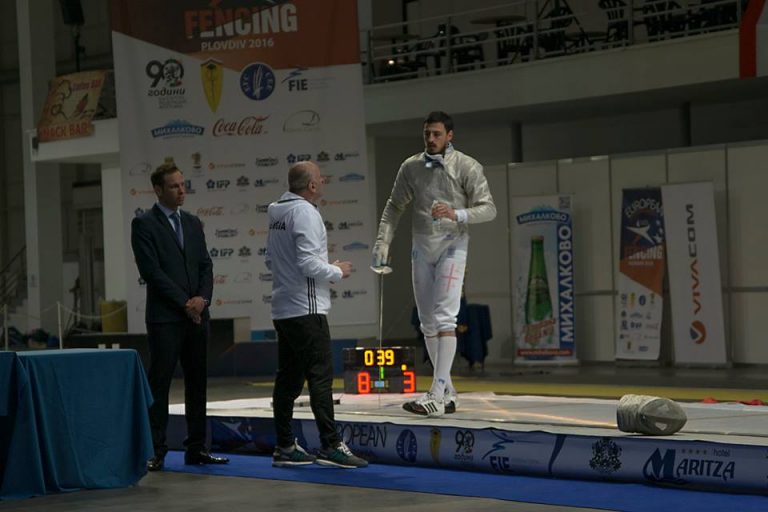 In 2016, fencer Sandro Bazadze won licensed competitions in the Czech capital and qualified for the Rio Olympics, where he suffered a disappointing 14-15 defeat in the sixteenth final and finished 12th. In the same year, Sandro Bazadze again won the European Under-23 Championship, also won the Istanbul satellite and finished second at the World Championships in Madrid. 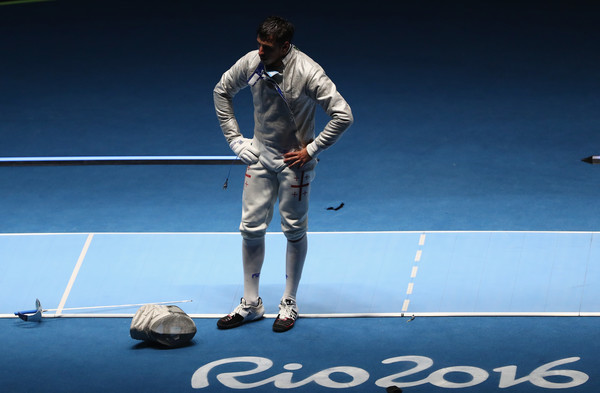 The following year, 2018, Sandro Bazadze repeated last year's result at the European Championships in Serbia and won a bronze medal for the second time in a row. In the same year, at the World Cup in China, the Georgian saber team (Sandro Bazadze, Beka Bazadze, Mikhail Mardaleishvili, Vazha Rechia) reached the semifinals and finished in 4th place with the best result in history. In 2018, another medal was won at the 2018 European Under-23 Championships, and Nika Schengelia took second place in sabre fencing.

Together with young athletes, veteran athletes have been achieving good luck lately, Nikoloz (Givi) Andriadze became a bronze medalist at the 2013 and 2014 world championships. 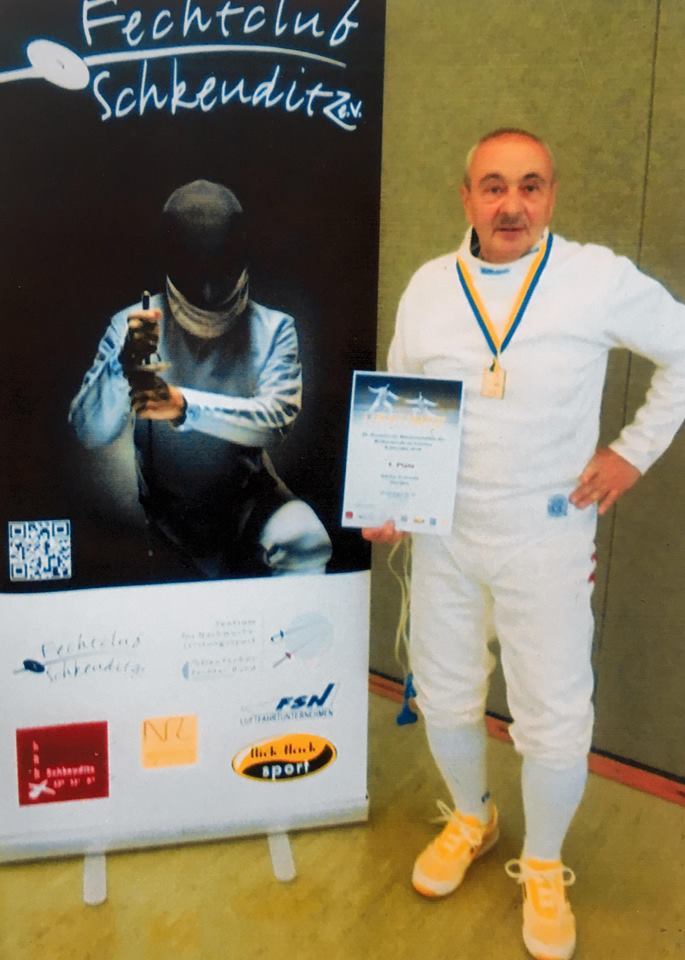